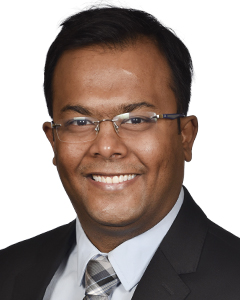 Rikin Shah, MD, is a board-certified pediatric hematologist-oncologist with the Haley Center for Children’s Cancer and Blood Disorders at Orlando Health Arnold Palmer Hospital for Children. He specializes in stem cell transplantation and cellular therapy, providing advanced care for children, teens and young adults with blood disorders and cancer.

Bone marrow is the spongy material in the center of the bones that makes all types of blood cells, including young blood cells called stem cells. In BMT, stem cells are filtered, and then put back into the same child or they are put into another sick child. These stem cells will grow and become new and healthy bone marrow. Transplanted stem cells are called the graft.

Stem cell transplantation may benefit several conditions, a few of which are:

Chimeric antigen receptor T-cell therapy, or CAR T-cell therapy, is a type of immunotherapy that involves extracting patient’s own T-cells – disease-fighting white blood cells – which are then turbocharged through cellular engineering techniques that reprogram them to target specific cancer cells. The technique essentially transforms the patient’s cells into what scientists call "a living drug."

Historically, treatment for leukemia has been heavily dependent on the use of chemotherapy. Unfortunately, the side effects of chemotherapy can be tremendous, as chemotherapy attacks cells both good and bad that are actively growing when the chemotherapy is given. In contrast, CAR-T therapy trains a patient’s own white blood cells to target specific cancer cells, sparing normal, healthy tissue. Imagine an army of immune cells in your blood, trained to search and destroy your cancer cells.

CAR-T therapy is a treatment option for children and young adult with B-cell acute lymphoblastic leukemia (ALL) that does not respond to treatment or has relapsed two or more times.

Dr. Shah earned his medical degree from Smt. N.H.L. Municipal Medical College in Ahmedabad, India, before beginning his postdoctoral training as a pediatric resident at Texas Tech University Health Science Center in Amarillo. He then completed a fellowship in pediatric hematology-oncology at the University of Oklahoma Health Science Center in Oklahoma City and a fellowship in pediatric stem cell transplantation at Baylor College of Medicine in Houston.

Information will update every 5 minutes. ER Wait Times are approximate and provided for informational purposes only. Estimated Wait Times as of: Tuesday, May 24, 2022 2:42 AM