How My Son’s Cancer Battle Has Shaped Our Family

A couple months after Nathan’s second birthday, we noticed he was limping. At first, we thought he’d maybe hurt his leg while playing with his older brother. Still, he didn’t really complain of pain, so we didn’t think much of it. But one night while he was lying on my lap, I noticed a trail of lumps behind both his ears. The combination of symptoms led us to visit his pediatrician. Nathan’s X-rays came back normal, but later that afternoon, we returned to discuss his bloodwork results.

It was August 2, 2012, when we heard the words for the very first time: “I’m afraid your son has cancer.” Nathan was 2 years old when he was initially diagnosed with standard risk Pre-B cell Acute Lymphoblastic Leukemia. He was admitted to Orlando Health Arnold Palmer Hospital for Children that very night.

This is how our journey with childhood cancer began. Our lives were forever changed.

For that initial diagnosis, Nathan completed just over three years of treatment. Most of the treatments were outpatient but still required multiple trips a week to Orlando Health Arnold Palmer during frontline treatment, which took about a year. The remaining two years—when he was in “maintenance phase”—Nathan took nightly oral chemo and received IV chemo once a month, along with a weeklong pulse of steroids each month. He also had a spinal tap every three months so that chemo could be injected into his spinal fluid.

In August 2016, Nathan—then 6 years old—was in remission for 10 months before he relapsed in his Central Nervous System Leukemia (CNS). We were heartbroken. It was much harder to hear the second time around. Nathan now required two additional years of intensive chemotherapy and cranial radiation. So, we commuted to Orlando every day for weeks.

Because the treatment for relapse was so intense, Nathan experienced many more side effects. He missed  another year of school and instead was enrolled in a hospital homebound program for all of the first grade. He returned to school for second grade, but due to his compromised immune system from still receiving chemotherapy, he missed weeks at a time. His new treatment plan also required multiple hospital stays, some lasting a few days, some a week, or—his longest—a month and a half. We spent Thanksgiving in the hospital, and he was discharged on Christmas Eve. 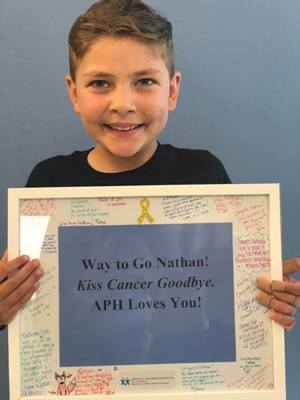 Nathan completed treatment for a second time August 30, 2018. Today, he is in remission. My son has monthly blood tests and checkups at Orlando Health Arnold Palmer to monitor his health, and we’ve had a couple recent scares where he presented with symptoms similar to relapse. But with further testing, it was confirmed that he is still in remission.

The Effects Cancer Had On My Family

My son’s cancer treatment altered my family’s lives in many ways. For one, I was forced to take a leave of absence from teaching for three years to care for him. My husband continued to work, but becoming a single-income family had a huge impact on our finances. The medical bills accumulated quickly, and we had to reach out to multiple foundations for financial assistance. Thankfully, we were blessed with a huge amount of support from our community as they organized fundraisers in our family’s honor.

Emotionally, balancing hospital stays and time together as a family was an overwhelming challenge. We live about an hour away from Orlando Health Arnold Palmer. When Nathan was admitted for multiple days or weeks, there were times when we would only see each other on the weekends. The Ronald McDonald House was a blessing during this time—they provided us with a way to spend some time together. But we went from being a family who did almost everything together to being apart multiple days in a row.

All of this separation and emotional exhaustion had a huge effect on my older son, Garrett, who is now 12 years old. 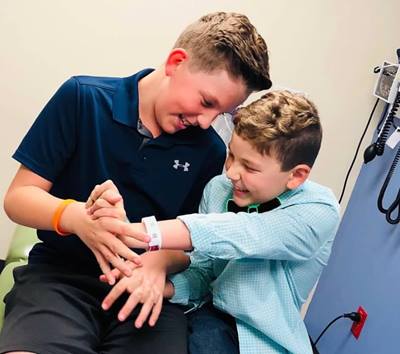 He was 5 when his younger brother was initially diagnosed, and then in the 4th and 5th grade during Nathan’s relapse. The two of them are very close, and Garrett was scared, sad and even angry at times while witnessing all that Nathan was going through. He spent much of his childhood in a hospital room by his brother’s side. Garrett also spent many days and nights being shuffled between the homes of family members and friends. There were multiple baseball games or extra-curricular activities that neither his dad nor I could attend because we had to be at the hospital. I know what an emotional rollercoaster Nathan’s diagnosis put on me as an adult, so I can only imagine what Garrett was going through.

I can’t imagine being on this journey without the phenomenal team of doctors, nurses, child life specialists and pet therapy members who work or volunteer at Orlando Health Arnold Palmer. They have become our second family and have carried us through this fight. They’ve cried with us on our darkest days and celebrated with us on our happiest. 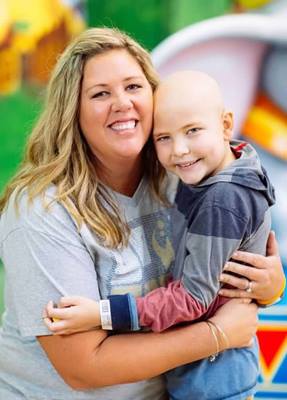 Words escape me on how to say how deeply grateful I am for all that they’ve done for us over the years. I will forever appreciate the loving care and support they have given, and continue to give, to our entire family.

Our lives are shaping into our new “normal” for a second time. Nathan will be 9 years old this month. I’ve returned to teaching third grade at the same school Nathan attends. He’s nearing the end of a wonderful year in third grade where he earned a spot on the honor roll during each grading period! He’s also picking up golf and enjoys playing with his dad. Although treatment is done, we’re still fighting every single day against relapse and the long-term effects of toxic chemo.

Even when in remission, the fear of relapse and loss is always there. We don’t know what the future holds, which at times can feel paralyzing. But every day is a reminder to be incredibly grateful that Nathan—every gloriously brave, handsome and smiling part of him—is standing here before us. 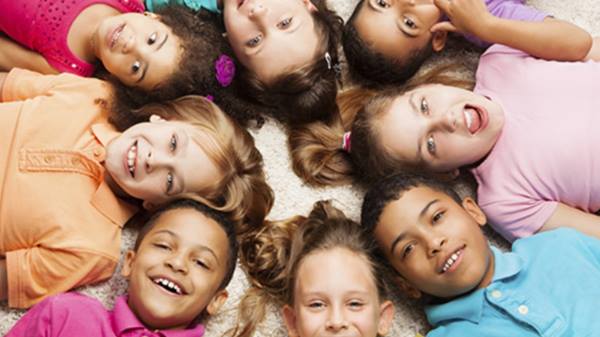 Learn More About Pediatric Oncology and Hematology at Our Hospital

The effects of a blood disorder can be life changing, but your family can rely on the years of experience of the pediatric hematology team at the Haley Center for Children’s Cancer and Blood Disorders. 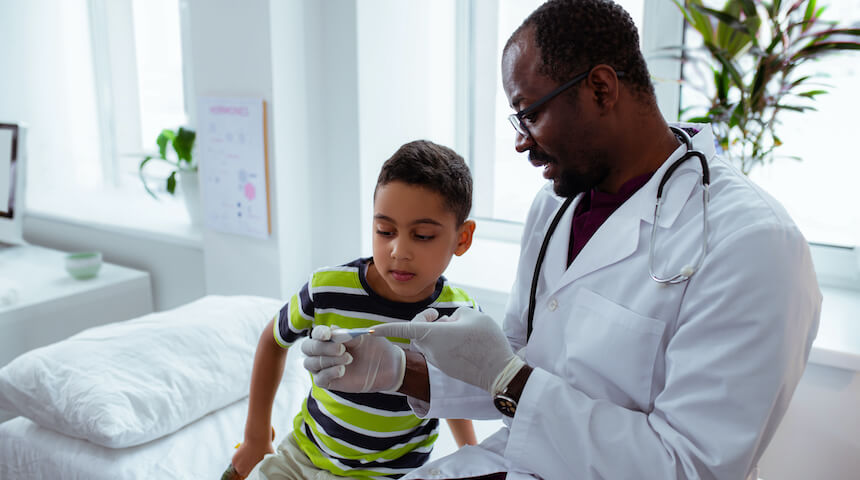 Information will update every 5 minutes. ER Wait Times are approximate and provided for informational purposes only. Estimated Wait Times as of: Sunday, October 2, 2022 6:18 PM