Are you cleaning your child’s ear with cotton swabs? Find out what doctors say about it.

Are you cleaning your child’s ear with cotton swabs? Find out what doctors say about it.

Earwax. It’s sticky, gooey and a terrible shade of yellow, certainly not something you want to see on your baby or young child. And when we do see that yellow goo, many of us manage it by what seems to be a very logical course of action- we take a cotton swab (often referred to by the brand name Q-tip) and clean out our kids’ ears. It seems as much a common sense act of caring for our child as brushing their teeth or washing their hair.

But did you know that using a cotton swab to clean a child’s ears can be dangerous? 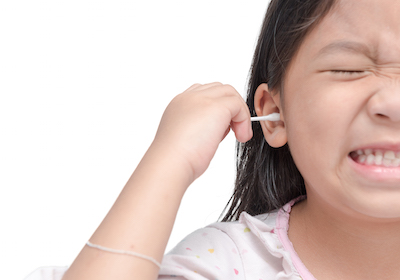 Roughly 34 children are seen in Emergency Departments around the country every day due to cotton swab-related injuries. It’s estimated that many more injuries occur but are treated outside the hospital by pediatricians or Ear, Nose and Throat specialists.

The most common injuries that occur are foreign bodies within the ear, perforated eardrums and soft tissue injuries. While these children are mostly treated in emergency rooms and released, it is possible for more serious injuries to occur such as injury to the eardrum, hearing bones or inner ear that can lead to long-term dizziness or balance problems or irreversible hearing loss.

Furthermore, pediatricians and Ear, Nose and Throat specialists have been saying for a long time (to adult patients and parents of pediatric patients alike) that we don’t need to clean our ears with cotton swabs. Earwax is healthy and protective when present in normal amounts. That yellow goo is actually protecting, lubricating and offering antibacterial activity to the ear.  Earwax is also self-cleaning- it undergoes a slow and steady movement from the ear drum toward the outside of the ear prompted by the motion of chewing and movement of the mouth.

Most of us feel like we have to use the cotton swabs to help get the excess wax out of the ear, but the opposite is what happens. Instead of drawing earwax out of the ear, cotton swabs actually push the wax further down inside the ear. Most wax impactions result from someone using a cotton swab or other instrument that has pushed the wax too far down into the ear.

Roughly 34 children are seen in Emergency Departments around the country every day due to cotton swab-related injuries.

How to clean your child’s ears

The most important thing to know about cleaning a kid’s ears is this: nothing goes into the ear canal. If you see earwax buildup, use a cloth or wet wipe to clean the outside of the ear- the portion of the ear that is easily visible to you. Don’t use any instrument to probe into the ear canal (the part you can’t see).

If earwax buildup becomes problematic, there are some over-the-counter items that can be tried such as glycerin drops, baby oil or mineral oil to soften the wax and aid in removal. If that is unsuccessful, your pediatrician or Ear, Nose and Throat doctor can remove the wax buildup with a saline irrigation or manually.

For the vast majority of adults and kids, though, we just need to use a wet cloth to wipe the outer portions of the ear and that’s it. And parents, we have to practice what we preach. When our kids see us stick that cotton swab in our ear, they want to try it, too. Let’s set a good example and keep cotton swabs and other small items where they belong and not in our ears!

Information will update every 5 minutes. ER Wait Times are approximate and provided for informational purposes only. Estimated Wait Times as of: Saturday, May 28, 2022 4:49 PM